Since I can remember, my favorite time period in American history has always been the Industrial Revolution. Having always considered myself a “city girl,” I loved learning how the cities came to be. Even though I am from New England, I always found the Pilgrim-era to be dreadfully boring (colonies-shmolonies, yuck!).

I have a tendency to take things at face value so in my mind the Industrial Revolution existed as a neatly packaged inspirational anecdote summarizing the determination of the American will to grow. Of course, this was fanciful revisionist history and the more I learned (in Mr. Williams’ 10th grade IB World History class), I was able to remove the rose-colored glasses to see the hardships and poverty alongside the growth and prosperity.

Living in Mongolia, specifically, in Govi-Altai, I feel I am getting a sense of what it was like to live during a time of such growth. Just yesterday I heard that 24-hour electricity came as recently as 5 years ago to my aimag. The development here is fast and furious, in terms of construction, public works and infrastructure. There are the buildings, of course, too numerous to count. There have been improvements that make previous blog entries obsolete (manholes have been covered, streetlights are on). In a town with only two traffic lights, there were additions I didn’t know were feasible, including speed-bumps, lane dividers and signage. There is a public bus (for crying out loud!) that makes a two-mile loop, from the Education Department to the Hospital. And, it looks like my part of town is about to get a paved road and maybe even a sidewalk!

And, yet, as exciting as it all is, a part of me is mourning the loss of the blue sky that’s obscured with each new level.

Coming soon: Govi-Altai’s third 5-story building. I’m told these are apartments for sale, around 50 million tugs, or $30,000. That is considered pricey.

This one has a garage underneath.

A break from Soviet-era block-style housing, many of the newer projects have a corner chopped off. This is our new Performing Arts Center. This photo of one of our two intersections with traffic signals also shows a crew working on a streetlight and the swanky new signage (pedestrian crossing in the foreground, and the yellow square within a white square is a ‘through traffic’ symbol).

Another building that went up in the past year (start to finish). I’m told the bright colors and patterns are also a response to the Soviet-era plain, drab, uninteresting block buildings. 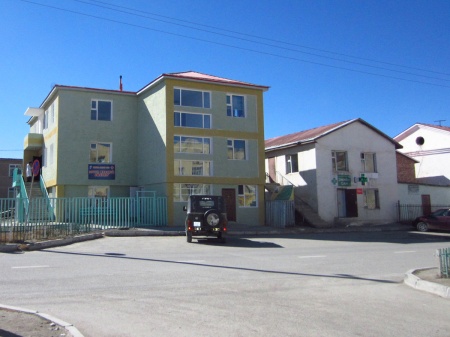 With a new bus, comes a new bus stop. 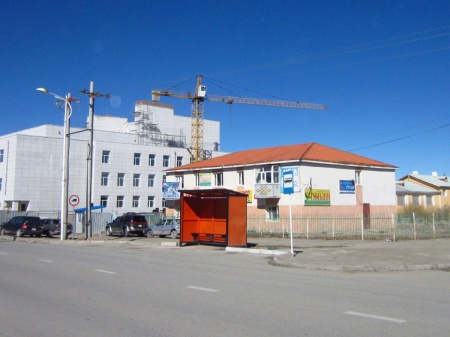 This project began six or seven months ago. 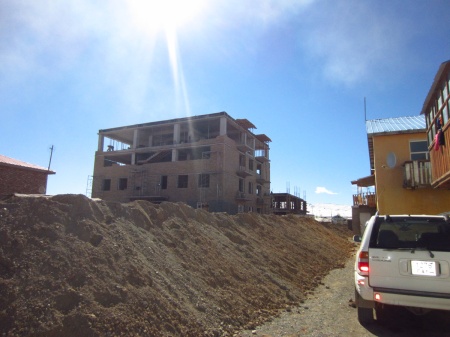 The “ruins” of Govi-Altai, juxtaposed with the contemporary, and indeed future, of building here. 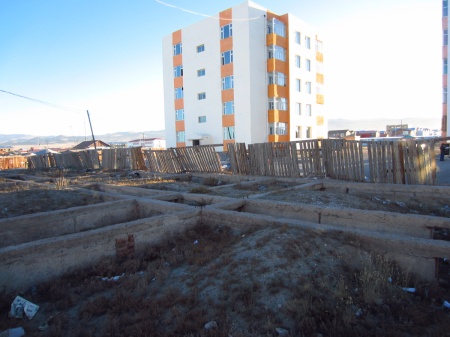 Effective September 1, 2013, Mongolia has a new minimum wage, 192,000T per month. The previous minimum was 140,400T, which meant that Peace Corps Volunteers were earning just over twice the minimum wage when I arrived last year.

Since we’re paid in togrogs, I know immediately whether I can afford something. There is an automatic conversion to a percent of my income that happens. I don’t have to convert the cost of things to dollars to know whether it is a good deal; I merely compare prices between delguurs, since most of what I buy is food. This means I don’t have to pay attention to exchange rates on a regular basis.

This summer, a German man was having trouble at an ATM in Govi-Altai. (He was riding his motorcycle from Germany to UB, another Other!)  He had planned to exchange a $100 bill, but it was Sunday and the banks were closed. (The fact that he had US dollars didn’t hit me until later; the international currency.) Since it was just a few weeks before leaving for my Russia trip, and I would need dollars to pay for my Russian Visa, I offered to take togrogs out of my account for him. (I had a brief moment of wondering whether the $100 bill I held in my hand was legitimate—I hadn’t seen American money in over a year!—but it was absurd to imagine that anyone would travel to Mongolia to launder counterfeit dollars.) I quoted him the last exchange rate I knew ($100 = 140,000T) and he agreed.

Turns out I got the better end of that deal, but not by too much. Now, take a look at this frightening graph showing the dollar to Mongolian togrog over the past year (from here).

When I came to Mongolia last year, the exchange rate was about 1350T=$1. Now, it is 1700T=$1. Again, since I’m paid in tugs, I wasn’t aware of this. Of course, we were all aware of the notorious inflation in Mongolia. Initially, some of us thought that store proprietors were trying to take advantage of us foreigners by charging us higher prices than those posted, only to be told by locals that, no, the prices just keep going up. In fact, the economy had been expanding so rapidly that it was noteworthy when the inflation had slowed to below 10%. Still, with such high inflation, we can probably expect another adjustment to our living allowance, so, thanks, my fellow Americans.

Another interesting money tidbit is that the minimum ATM withdrawal is 1000T (which is now about 50 cents); you can get a decent ice cream cone for that price. Can you imagine taking so little from the ATM?!! Also, I used the ATM for many months before reading a message on the screen that there is a per transaction fee of 100T. So, for those who do take the minimum amount, the fee is 10%, which I know is only pennies, but still, 10%!!!! Since reading this message, I now take 100,000T at a time (unless I am lazy and press the 80,000T button, which is the highest pre-set amount).

One of my students showed me this: Sad Chinggis. 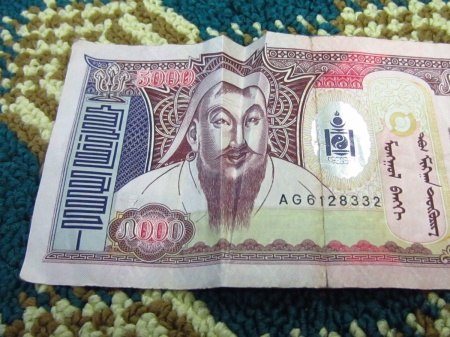 I know I’ve done this with George Washington. I love that there are such simple universal amusements.

The Mongolian academic year kicks off on September 1, even if it falls on a Sunday.

Surely there is variation in how this is celebrated across the country, and possibly from school to school. Here’s what I saw at School #5: Just after 8am, students arrived to school wearing their uniforms. Many of the younger students’ parents were there. Two senior students (my students!) were MCs. The principal and the representative from the Education Department (my CP) gave speeches. There were performances galore, including the traditional морин хуур (horse fiddle, this instrument has just two strings and is played with a bow). According to my CP, a song sung by a boy included the lyrics, “teachers, who hold the pens, you are God.” For the finale, the senior student MCs sang a song, while two first graders, a boy and a girl, walked around the yard jointly ringing a bell to signal the start of the new school year. This was followed by the first graders filing into the school. 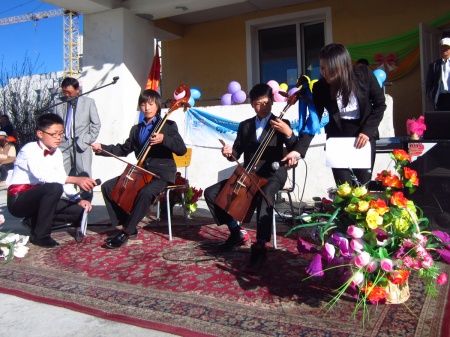 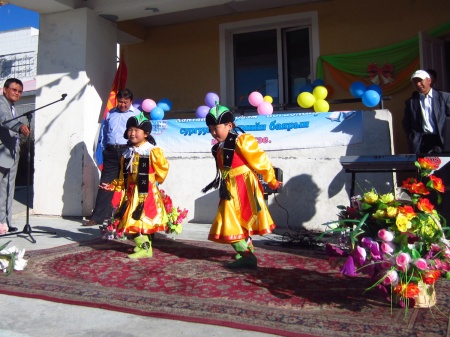 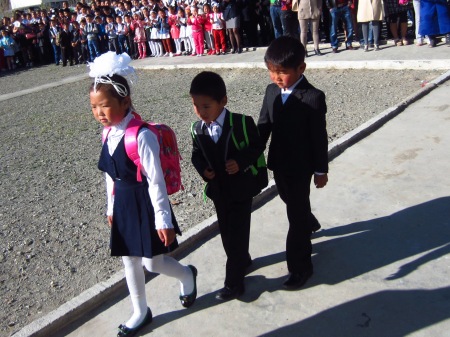 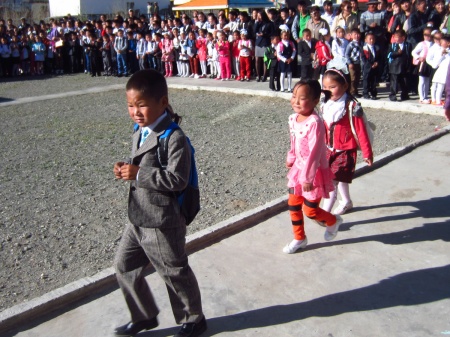 MST gave us the opportunity to have an informal language assessment. All of the language teachers Peace Corps provides are friendly, speak clearly and at a slightly slower pace than normal conversation, and allow us the precious time to finish our thoughts. In that way, these aren’t like regular conversations with everyday Mongolians. I subjected myself to it because I needed validation that my Mongolian language has improved over the last year. Another reason was because I wanted that confirmation to motivate me to redouble my efforts at language study. Without further suspense (insert drumroll here), I advanced by TWO levels!!!—from Novice-High (the minimum proficiency required by Peace Corps) to Intermediate-Mid.

The language assessment was a conversation between me and the tester. We covered the basics: where I’m from, where I live in Mongolia, where I work and what I do. She asked how far I live from work and I told her it was about a 7-minute walk. She asked me to tell her about my apartment and had a follow-up question: what floor do you live on? I didn’t hesitate: Bi neg davxhart amdardag—I live on the first floor. She asked about my hobbies and I said I make hats and she asked, “how many hats did you make?” I wanted to answer “When I was in America, I made…” but I realized I didn’t know that grammar point, so I fumbled my way through but she got the gist (90 vs 15). She asked how many people live in Boston and I answered 500,000—though I’m not sure of the accuracy of that number, it’s what I’ve been using. I told her Boston is a small city (because in my mind it stretches the 3 miles from the North End to The Fenway), then she wanted me to compare it to the million people in UB… I didn’t know how to explain the nuance of “Well, Boston includes Dorchester, Southie, Charlestown, East Boston, JP… so, in fact, it’s much bigger than 3 miles.” But, I understood what she was asking and will leave out the 3-miles bit from now on. At the end, she invited me to ask her questions. I started with “Where are you from?” and expressed surprise that she was born in UB and had lived her whole life there. I asked what languages she speaks and she answered “Of course, Mongolian, also Russian, and a little English.” I asked her if she thought English was difficult. She was emphatic that it was. She wrote the word “light” on a piece of paper and said, in Mongolian, “Why?!” I just shook my head in acknowledgment… the madness of English.

Immediately upon learning of my two-level increase, I realized that if I were to improve another two levels by Close of Service, I will finish Peace Corps service as an Advanced-Low speaker of Mongolian. But, knowing that I put in minimal effort (limited to vocabulary study) this past year, and since I plan to really study and speak more over the next year, my goal is Advanced-High. There it is, in writing, for the world to see. Four more levels—ZA!