Yesterday, I tried the treadmill in my office for the first time. Today, I tried the scale. After converting the kilograms to pounds, I’m really not sure whether to believe my eyes. Suffice it to say, I don’t feel 30 pounds lighter.

Prior to leaving Boston, I had an amazing Memorial Day weekend camping trip with my awesome cousin, Liz (hi cuz!), and many more adventurous members of Chiltern Mountain Club. This is relevant because one of the activities at the campground was zip-lining, which required me to weigh myself (and sign a waiver in case I plummeted). Were it not for that, I’d have only a guess as to my pre-Mongolia weight of 183 pounds. You might even add a pound or two from the goodbye Italian dinner with lots of sangria the night before my flight.

Dropping weight as a PCV in Mongolia seems as hard to come by as frostbite in winter. Since that’s not the case at home, I thought I’d share the secrets of the Mongolian diet. (And by “secret” I mean things we already know but need to overhaul our lives in order to enact.) Since weight loss boils down to calories in vs calories out, let’s first take a look at the calories out by comparing activity levels here and there. Then, we’ll examine the calories in.

Though I always feel better after having exercised, I have a hard time getting motivated to do it. So aside from hikes maybe once a month and walking around Boston (mostly to the train), I didn’t get much activity in the mild winter before leaving. I did bike the 3 miles to and from work, totaling an hour a day, from when the Hubway bike-share reopened in mid-March until I left my job in mid-May (a sad day, indeed). And I did get to a few yoga classes during that first half of the year. But for the most part, I was somewhat of a couch potato… one of the things I was hoping to change by the mere fact of starting over in the Peace Corps.

So, here I am 5 months into living in Mongolia, and weighing in at 69.9 kilos—154 pounds—if that scale is to be believed.

While I’m not watching nearly as much television, I am still somewhat of a couch potato. I walk everywhere, but the town is so small that everywhere I need to walk is within 20 minutes of where I am, which is equivalent to walking to/from the train at home. I’ve done some long walks, just for the sake of walking, but not often enough for them to have made a thirty-pound difference. That’s why I’ve titled this blog “eating”—because that has to be my biggest behavior change from living in Boston.

Now, I’ve already posted a blog about what I’m eating and how it is pretty much American fare, so I think this effortless weight-loss comes down to two things, neither of which will be a great revelation: portion control and what I’m not eating.

Portion control
My host-mom would always serve me a heaping plate of food. Even though I enjoyed her cooking, I didn’t want to stuff myself. Thankfully, it got to the point where I felt comfortable enough with her that I could ask for less food. I would make a sweeping-off-the-plate motion with my hand and say tom hool or “big food” since I didn’t know how to say “too much” in Mongolian. About half-way through PST, I realized that we were using what would be a salad plate back home. And I never had “seconds” whereas, at home, I’d use a dinner plate and often have a second helping. I’d heard and dismissed this trick of using a smaller plate, but now I’m a believer.

Now that I’m on my own, in charge of my own meals, I haven’t reverted to my old ways. My studio apartment was furnished with certain necessities, among them 2 juice glasses and 2 bowls. Those two juice glasses are traditional juice glasses, I’d guess 4 ounces; those 2 bowls are small, I’d guess 1 cup. I have juice with almost every meal and I usually have just one glassful. (Contrast that to the 20 oz bottles at home!) When it comes to food, sometimes I do have a second helping, occasionally I’ll even have a third. But, I never give it a second thought (i.e., feel guilty) since it is a freshly home-cooked meal (i.e., no preservatives or mystery ingredients) and given that the food I eat here is already so simple (i.e., low in calories). Tonight was a three-helping night. On the menu: black beans and rice with a side of cabbage. Two months after moving in, I still have just two bowls. I need more if I’m ever to host a dinner but I readily admit I am hesitant to get large plates.

What I’m not eating
Some people drink coffee for the pick me up; I drank coffee for the taste of it. That meant I could go the whole weekend without it, so I never invested in a coffee pot. But since it was freely available at work, I partook. My preferred coffee taste is sweet and light with cream. In Boston vernacular, that means to make the coffee light by adding cream rather than “light on the cream.” Do you have any idea how much cream it takes to get a coffee light? I’d guess a quarter cup of cream. I realized even then that the more coffee I drank, the more cream and sugar I drank down with it.

Thankfully, at this point in my life, I wasn’t much of a fast food eater, in terms of the national burger chains. But there was lots of quick food: sandwiches from the work cafeteria, a sub from the deli in the convenience store, a slice of pizza on the way home, a breakfast sandwich (on a bagel!) from the coffee shop on a Saturday morning. Not only were all of these enormous in my hindsight eyes, but they were sometimes accompanied by a bag of chips or a pint of ice cream or another impulse purchase. Sure, I tried to get at least two or three servings from that pint, but now I have the same amount of ice cream every night—none.

Eating out was never reserved for special occasions; I did it as much to socialize as I did to eat. Actually, maybe it was more to socialize. In any case, in addition to the main course, I’d sometimes have an appetizer and almost always have a dessert.

Not having as many take-out or casual dining encounters has diminished my meat consumption to almost none, since I don’t cook it. Meat has appeared at group dinners (chicken, camel), meals with Mongolians (mutton), and the few times I have eaten out here (mutton, beef), but that might average to twice a month.

There you have it. The crazy thing is, not having these things isn’t felt as equivalent to making a sacrifice. Sure, I’d love an eggroll or a brownie sundae, and maybe if I lived in a soum and had even fewer options than I have, I’d feel the absence of everything more acutely. But, they are simply not here, and I think I’ve always been one to look at what is, rather than what’s not. 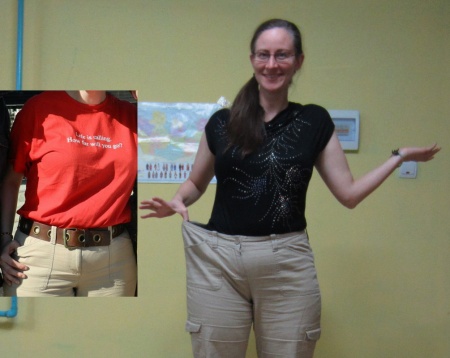 This entry was posted on Friday, November 9th, 2012 at 10:02 am and is filed under Uncategorized. You can follow any responses to this entry through the RSS 2.0 feed. You can leave a response, or trackback from your own site.

One Response to eating